Motherhood, mental illness and beyond

Taking my 4 year old daughter shopping has become a bit of a minefield lately. Not because she doesn’t behave; she’s always good and enjoys helping to choose what we’re going to eat that week. It’s not because she pesters for things either (although sometimes she does, of course – she’s 4!). No, it’s because of magazines like this: 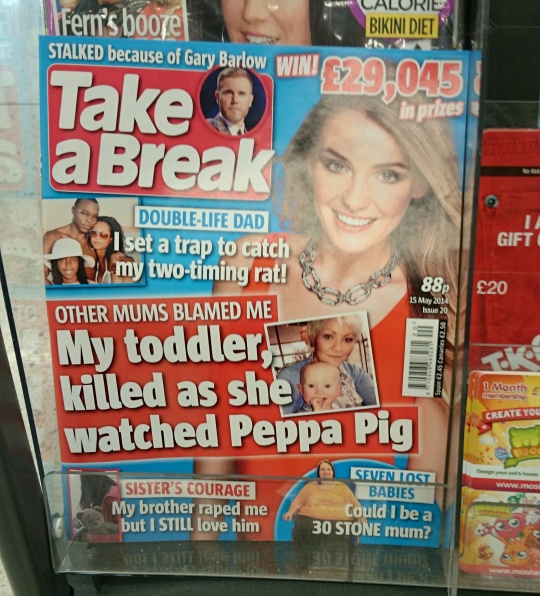 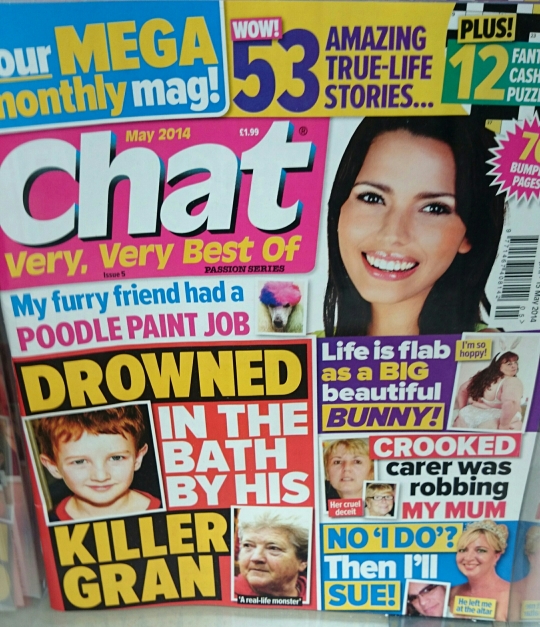 Here are some more examples from the last couple of days: 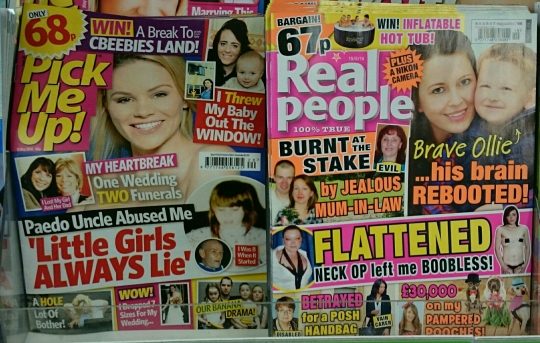 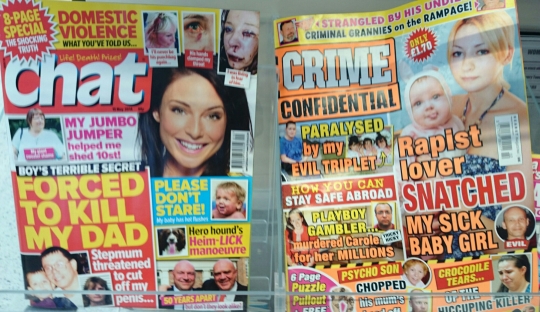 Are these really the messages that our children should be exposed to?

“My toddler, killed as she watched Peppa Pig”
“Drowned in the bath by his killer gran”
“My brother raped me but I still love him”
“Paedo uncle abused me: little girls always lie”
“Burnt at the stake by jealous mum-in-law”
“I threw my baby out the window”
“Forced to kill my dad”
“Rapist lover snatched my sick baby”

Don’t these headlines just sicken you? It’s a constant barrage of misery and pain. Personally I find these magazines extremely distasteful and repulsive. But to a child they’re just utterly bewildering, with concepts that they’ve never heard of (“Mummy, what does rape mean?”) or shouldn’t have to consider (“Mummy, was the toddler killed because she was naughty?”). I don’t want my children to know about these things until they’re considerably older. To be completely honest, I really don’t understand why anyone would want to read these magazines. But there seem to be more and more of them these days, so presumably a large swathe of the population finds them simply delightful. Each to their own, I suppose. Whatever your opinion on these publications though, I doubt that there are many who would disagree that it’s wrong for children to be exposed to these horrific headlines.

When the UK group Child Eyes started out they were campaigning against sexualised images being displayed where children can see them (magazine covers, newspapers, billboards etc). Now however they’ve also begun to campaign for this type of magazine to be stocked out of a child’s line of sight. One British supermarket, Morrisons, has already agreed to take steps towards this; I really hope that other retailers soon follow.

When misery is selfish

A while ago I wrote this post about how I would dearly love to have more children but am unable to, mostly due to issues with my mental and physical health. I thought that I was gradually adjusting to the knowledge that DS is my last baby, that the large family DH and I yearn for will never exist. But this afternoon I was sorting through my maternity clothes and some baby clothes that DS has outgrown and I found myself sobbing quietly into a sleepsuit.

My last pregnancy wasn’t great, I suffered from AND (antenatal depression) and my mobility became so poor that I was housebound for the last month or so. But I would do it again in a heartbeat and the pain of knowing that I will never again know the thrill of having a small life growing inside me hurts me almost more than I can bear.

However I’ve been told on many occasions (mostly via social media but occasionally in person) that I shouldn’t feel like this, let alone admit it publicly. Apparently it is selfish and inconsiderate to those who are unable to have any children. I should count my blessings and stop feeling sorry for myself. Now, I have the deepest sympathy for anyone who wants children and cannot have them; I remember how desperate I was before DD was conceived and I can’t imagine the misery of knowing that you will never have a child. But I have come to realise that that doesn’t make my pain at not being able to have more children any less real, any less valid, any less painful.

As friends have pointed out to me, my having children doesn’t mean there are fewer children left for others – there isn’t a finite number to be shared out. Equally my pain should have no bearing on whether friends and acquaintances have more children; their reproductive decisions should be based on what is best for their family, not whether or not it will twist the knife a little deeper for me.

Conception isn’t the only topic where I have encountered this attitude; I have also been criticised when discussing poverty and finances. I have made no secret of the fact that DH and I are both out of work, that we have very little money, that every penny is stretched as far as it can go. But again I have been accused of selfishness if I admit that constantly counting the pennies and going without is stressful and makes me deeply unhappy. Yes, there are people who are worse off than I am, people whose children have no shelter, no doctors, no food. And of course I know this and I am grateful to live in my circumstances and not theirs. But knowing that there are many people worse off doesn’t make my money go any further. Knowing that there are families who are homeless doesn’t make me any happier about having to ask my mum to buy the children new shoes because we can’t afford to.

It can be helpful to remember that there are those less fortunate than ourselves. But there’s a difference between “Hey, it could be worse” and “You have no right to feel that way because of X”. Lecturing and berating someone for how they feel will not make them any less unhappy. It will change how they view you and whether they’re honest with you in the future. It may also change whether they’re honest with anyone else about how they feel or whether they merely bottle up the misery with an added dose of shame and guilt for feeling as they do.

© SamCandour and DelusionsOfCandour, 2013. Unauthorized use and/or duplication of this material without express and written permission from this blog’s author and/or owner is strictly prohibited. Excerpts and links may be used, provided that full and clear credit is given to SamCandour and DelusionsOfCandour with appropriate and specific direction to the original content.